United Latinos for the Arts in Los Angeles (ULA LA)

When I, Angelica Gonzalez-Oriol first came to Los Angeles, I volunteered at the Mexican American Legal Defense and Education Fund (MALDEF) and I then later became part of their leadership program.  It was through MALDEF that I found out that Latino artists had little or no representation in galleries/museums and that that they received less than 1% of the funding given to the arts. Working with some members of the MALDEF leadership program I founded United Latinos for the Arts in Los Angeles (ULA LA), as an advocacy group for Latino artists.

As part of my advocacy, I was also producing videos on artists to give them more visibility and opportunities. I was showcasing these artists and videos in a cable show I called L A Art. Some of the artists I featured were in videos: Patssi Valdez, Rudy Calderon, Alfredo de Batuc, Margaret Garcia, East Los Streetscapers and others.

As part of my continued advocacy, Women of Color, a friend Dr. Naomi Quinonez, myself and few others, approached Plaza de La Raza to ask them to open their doors to local artists. Plaza was then closed to Chicano artists and we advocated for them to open exhibit opportunities. We succeeded and ended up producing the FIRST exhibit of all local Chicana female artists to exhibit at Plaza de La Raza. The exhibit was hosted in the Boat House, “Adios to Frida,” featured visual artists: Yreina Cervantez,  Patssi Valdez, Linda Vallejo, Margaret Garcia, Dolores Guerrero-Cruz, Diana Gamboa, Kathy Gallegos, and Barbara Carrasco. Poetry Readings by: Espana, Quinonez, Alvarez, Pino, Cervantez and Delgado, March 29, 1987.

In part of my leadership group with MALDEF, was a man named Victor Franco who worked for Miller Brewing in Community Affairs. I approached him for funding to do more videos. Mr. Franco said he loved what I was doing with the artists but preferred an art exhibit and that he would give me money for it. So now I had money for an exhibit but no space. That’s when MALDEF (Magdalena Duron) put me in touch with City Councilman Richard Alatorre. Mr. Alatorre told me to go check out this building that had been abandoned for over 40 years, windows were broken, some floors and walls were missing and some homeless had been living there for years. I went to see it, and fell in love with the building, the Pico House. I then went back to Mr. Franco and he agreed to give me more money for the needed repairs of the Pico House.

Now with money for an exhibit and a space I needed help from someone with construction background. That’s when I was introduced to Eriberto Oriol and that’s when the LOVE story began, but that will be another chapter.

The Pico House was in shambles and needed lots of work to make it work as an exhibition space. Eriberto became responsible for the exhibit installation and space design. Eriberto brought in Reyes Rodriguez and his crew to put in floors, walls, the windows and paint the inside. Remarkably within 2 weeks the building was beautiful and ready to be used as an exhibition space. Daniel Martinez/artist a friend of Eriberto came and saw what we were doing and pretty soon we had exhibition lights from Cal Arts. The Pico House was then ready for it’s first exhibit. 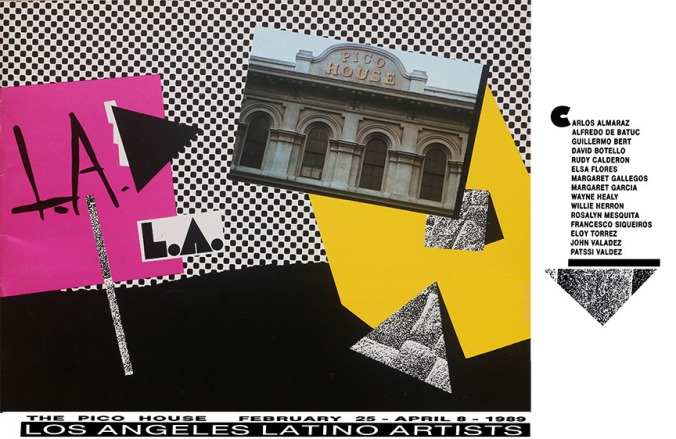 Patssi sold every one of her pieces she had at the Pico House. A curator from France saw her work there and soon her work was seen in France, Spain and Sweden. See Valdez full story in the L A Times.

To John Huerta from MALDEF,  godfather of ULA LA, thank you for drafting the articles of incorporation.  Could not have done without your help, Gracias for all your work.